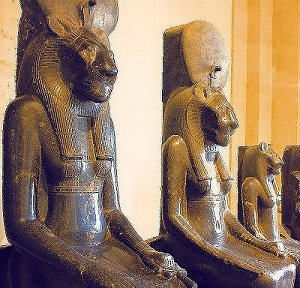 The adage that we are known by the company we keep probably is very true within the Kemetic Community – perhaps even doubly so. It has become frustrating and disheartening to be judged by people whom you don’t know, who don’t know you, or your specific religious path – nor do they care really! For someone to offhandedly decide that you are not with the “in crowd” or that somehow, will pronounce that not to be of a certain religious affiliation, or sect will deem you unworthy to be given the time of day. Some of course, fear recruitment or being indoctrinated into some sort of cult based on internet rumours that they may or may not have heard.

I am Kemetic. I was trained and ordained as a Kemetic Orthodox Priestess of Sekhmet/HetHert in 1998. I stepped down a couple of years ago by choice, or as one internet website geared toward atheists said, “I retired.” I kind of laugh at that. One does *not* retire from Sekhmet’s service. Your service may change, but it is absolutely for life! At any rate, my reasons, initially, were because I was attending college full time and could not give the level of service required. My situation has changed a bit, and so now my reasons of not wanting to return to it again are deeply personal. I can and will say quite clearly that it was not because of any rift with the Temple, or disagreement between myself and any of the membership. I have been listening to Sekhmet’s call and it has been specific and in a direction by necessity. That doesn’t make anyone bad or wrong. It just makes it a different route that I have chosen to take.

All of us must by necessity approach our spiritual life on a personal level. We may choose to join or Initiate in a specific sect, temple or path, but ultimately, only we as individuals can decide when to move on. Each of us, who are Kemetic, have personal rites. Sometimes this entails a daily practice that follows a formal outlined structure, such as that which is outlined at the Temple of Horus at Edfu. While at other times a practitioner may choose something more fluid, eclectic or non-traditional. Each is a valid structure and approach to the connection to the Netjeru.

That being said, the only things that become annoying are those who insist on the belief of either a maddeningly absurd UPG-type of approach, or those who cannot and will not move outside the formal scholarly sanctioned type of practice. I have found by direct experience that there are deep pitfalls within each extreme and either can be deleterious for spiritual understanding or growth. Egyptology does *not* know everything. Conversely, I have seen so many ridiculous, crackpot theories that should never have made it outside of one’s own personal headspace, let alone made it into print for others to try to decipher.

One extreme, that of the scholarly community only, and especially within Egyptology’s ranks, often eschews and ostracizes those who “actually believe in any of this stuff”. In some place it becomes so much of an issue that those who have made it into those hallowed halls of the scholarly ranks take great pains to either conceal, downplay or flat-out deny that they actually do worship the old gods. These individuals dare not speak of it or it may cost them their entire career or get them passed over for any future projects because their beliefs are not considered “objective enough”. I personally know of several tenured professors or professional Egyptologists who by necessity are very guarded about their personal beliefs. I can state quite clearly that their fears are absolutely justified. Egyptology is neither easy nor cheap to take up as a scholarly pursuit. Admissions into these programmes are prohibitively expensive and generally only accept a tiny handful of students each semester or once a year. Most of these who are accepted have and/or have maintained a 4.0 GPA. Further, that high GPA must be maintained or that student will get a boot planted in their posterior and find themselves completely washed out and with student loan amounts that are nothing less than nightmarish and just shy of the national debt.

The Kemetic Community, I think, is going through something that much of the so-called Pagan “Community” is going through. I believe that there is far too much backbiting, petty, catty and deeply personal bitching among the ranks. People either are wrapped up in an idea that if you do not belong to X group, you obviously are “doing it wrong”, and if you are a part of that group – or have been trained by it, have handed your brain, your soul and your personal assets to some sort of mindless cult of personality that does not allow for personal considerations.

I call “Bullshit,” on both points of view.

Even with my training and years in the priesthood, I interact with those who are not Kemetic Orthodox. I spend a great deal of time with people who come from many different faiths and belief systems, and each gives me a perspective that I would not have had otherwise. In so doing, I am able to form my own opinion that has nothing to do with toeing a party line, a religious canon or being a spokesperson for any given temple or group.

If I see a person make an incorrect, ill-considered or socially repugnant statement to the general public, I have no compunction but to call them on it and tell them why I feel that way. Conversely, I expect to be accorded the exact same service be done to me in return. I also expect that it will be done without the need to resort to ad hominem attacks. I think that is more than fair. Of course, there will always be those who claim to be holier-than-thou, or claim some sort immunity because of the number of books they wrote, lectures at Pantheacon they conducted or letters after their names in terms of university degrees. The political correctness and personal butthurt needs to be put away and replaced with something that resembles common sense. If we cannot have that, then what’s the point, really?

All of us who consider ourselves to be Kemetic have a single and solitary foundation. That foundation is not exclusive to any one group, or leader or anything else. We have nothing other to worry about than the idea of Ma’at. Each of us must decide what that is and where we are at personally. Under that one single idea / ideal, there is enough there that is complex enough to keep all of us occupied for the whole of our personal and spiritual lives. We are held responsible and we hold those whom we associate responsible as well. When we do this, we are held responsible for our own actions and words in the context of not only our own lives but the greater whole within the Kemetic community and within the world at large. With this single understanding, some of the petty, single-mindedness is stripped away, and we by necessity have to sit down and listen to the thoughts, concerns and observations of others. Being able to see that perspective and say, “Yes, you are right,” does not, therefore, declare us to be lepers within the groups that we are a part of – or not a member of. It means that we can each be viable on our own, and that we can stand up for ourselves and what we believe, rather than hiding behind an organization, a label or anything else than our own sense of rightness – or our own sense of Ma’at.

Why is it when you are what some might consider beautiful, that they often like to assume that you must at least be stupid as well? As if the gods could not be bothered to give you both intelligence as well as attractiveness! I find myself being talked down to on a regular basis. Then if by chance they do find out that you actually have wit and intelligence to match the package, they almost instantly become intimidated by it. Every moment that follows thereafter they spend trying to discern what your flaws are. I have seen some literally scrunch up their faces with determination while trying to ferret out what it might be that could be my Achilles’ heel.

I recently received a correspondence from a ruler of my acquaintance.

I am astonished that you have come to know how to read and write, Madame! Surely this is an unnatural state for a woman! Such things, in my experience, are unfit for women to know. Begging your pardon, I find it unbelievable that you do not have a male scribe to dictate your correspondence to! Surely your race and your people know that it is absurd to teach learning to women! Surely a woman as beautiful as yourself has no need to take upon herself such tasks that are ill suited to her. You, Madame, should beseech your greatest advisers to find you a suitable match who can alleviate such concerns from your brow. Certainly some women are quite able to handle the arduous duties of commerce and rulership, but if left unchecked without the guiding hand of a man, a woman will be left helpless and fall into the trap of mental imbecility. Your people do a grave disservice to you, Madame, if you are left to your own devices so tragically!

A woman’s attention should focus upon her appearance, with the closest attention to her garmenture and appropriate jewellery. She should be of good temperament and docility in order to be nothing but the greatest pleasure to her husband. Giving a woman over to learn those things which are the realms of men gives her to arrogance and self-conceit. Such are the consequences of filling a woman’s head with more than she can readily handle. It is by far the best institution of the Gods that most women should die upon the pyre with the bodies of their husbands, since they are mostly incapable of acting for themselves. These are wise regulations for any man to live by and women should feel protected by such considerations to her care!

I am unclear as to how I should react to such a ridiculous missive! I have ruled alone for many more years than this over bloated and certainly overdressed popinjay has been alive. If it were not so tragic it would be laughable. My only hope is to one day meet this man face to face and make his wives widows and with the right of conquest set them all free and leave his wealth to dispose of as they choose.

But what is true, it was not so very long ago that even the so-called modern world viewed women with such disdain.