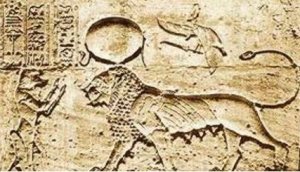 Part of the Sekhmet mythos is that she is known as a Wandering Goddess. After her near-complete destruction of mankind, Sekhmet decided to wander away from Kemet, particularly her home in Heliopolis, her father, wanted to entice her to come home and so he sent Djehuty (Thoth) to bring her back. When she did return home, there was much rejoicing.  Welcome Beautiful One! Welcome in Peace!

Interestingly, this particular mythos coincides with the time of year when days become shorter and when they go back toward becoming longer.  Here in the Wapsipinicon River Valley, it coincides almost perfectly to the day with the time that the vultures leave our skies to when they return once more in the early spring.  I always found it interesting that Mut, who is sometimes represented as a lioness and sometimes as a vulture, has close ties with Sekhmet.  No matter what place or what rhythms of the year we find ourselves, it is interesting that there are beliefs, myths, festivals and traditions that link closely to those events.

Over the years, I have come to identify with that particular myth because my occult life was a bit like wandering.  Not knowing exactly where I belonged, but when I was old enough, experienced enough, and mature enough to see who I was and what my core beliefs were, the wandering ceases and at last, I felt that I could come “home”.  It began as a very young girl, feeling a deep affinity to the Virgin Mary. Even to my child’s mind, of course, she was worthy of veneration and worship! Was she not the mother that brought the Divine into the world?

I was also raised with an awareness of Indigenous beliefs. There was the Spider Woman who wove the world, the White Buffalo Calf Woman, and so many other stories that underscored the role of the feminine in All that Is and yet did not deny the masculine either. According to the beliefs of my father’s people, the Crow and the Cherokee, a balance was and is important. Later as I became a teenager, I saw this feminine aspect of Creation as Aset and the male as Wasir – or something else I couldn’t quite put my finger on.  Even when I became a Wiccan dedicant, I always viewed the Mother as Aset or Hathor, or a combination of both and the Father was somewhere between Tankashila and Amun, the Hidden One.  Diversity of belief is a beautiful thing – until someone with an axe to grind or a point to try and “prove” tries to force you into their way of thinking while vilifying any kind of understanding you have that isn’t identical to theirs.  Others, as I have experienced, would have you disavow any skills or magical abilities that you developed, sometimes over years of time, if it doesn’t fall into rigid beliefs.

Let me say, speaking from experience – never do that. If anyone says or actually infers that you should – tell them to go straight to hell, then leave and never look back.

Eventually, I found my way to an actual Kemetic Temple. It had been my goal – or so I believed. It has been a wonderful experience for the most part. Even after being ordained as a Priestess of Sekhmet in 1998,and I met the most amazing people and had experiences that I would not have had otherwise.  After giving several years of service to the organization, as with anything, it and life changes. I found myself returning to school, dealing with and recovering from breast cancer.  The temple that I knew and loved went from the place I could drive to on an afternoon to one where it was in a large metropolitan area on the West Coast. Going to gatherings, particularly during a global pandemic, has become less viable; at least for me.

Though not connected to the temple, I moderate several Egyptian / Kemetic groups on social media. Some I created. Others got pretty much dumped in my lap. Given the volatility in our overall civilization, with more attention rightfully being cast on issues of race, ancestry, and everything else in between, they aren’t feeling much like “home” either lately.   Currently, I am in the process of backing away from those Kemetic groups that got foisted on me and keeping only a few.  I have a few reasons for this.  My path has changed to where my focus is mainly on my herbal work and magic. I also have found that I have other Sekhmet siblings that are doing deeper, more intense work with Her that is worthy of note. Namely, my friend, Aubs, who writes Mystical Bewilderment. Aubs has shown the level of detail and dedication that I wish I had done a long time ago. If you have not checked out her blog, I strongly encourage you to do so.

Of course, my life will always be tied to Sekhmet in some way.   That much will never change.  However, I have also learned that we live on land that once belonged to the Oceti Sakowin Oyate – the People of the Seven Council Fires, otherwise known as the Great Sioux Nation. There are people buried here, and I am told they likely wintered here, particularly by the creek which cuts through the center of a limestone canyon on the property.  In deference to those who were here long before we landed here, every day I go outside and offer a prayer:

It’s been very interesting that ever since I made that a habit I have found the land and the wildlife that we share it with – eagles, owls, deer, coyotes, raccoons, possums, badgers, birds, the trees – all of them seem to respond. I believe that they, like any other living being, seem to sense when they are respected and valued. Working with the genius loci has been a revelation and a relief. There is direct communication going on here that cannot be found in musty tomes or within the notes or scribblings of another.

That sort of thing isn’t found on social media, in discussion groups, or at the gatherings of a congregation or formal group. The insights come directly without formal ritual or the seeking of permission via a hierarchy. It’s something much deeper.  It can sometimes force you to remember experiences that happened perhaps decades earlier which caused you to be in the place where you find you’re standing at a precise moment. Those kinds of realizations may serve the purpose of making us realize just how connected we all are; of how what we do affects everything else. As far as I am concerned, this land IS my home. I love it like no other place on the entire planet. No matter what organizations I choose to be a part of or ally myself with, nothing will ever change that.